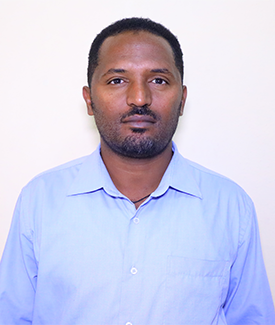 Daniel Tadesse is an Associate Professor and a PhD student. He worked at Ghion Preparatory and Secondary School in Bahir Dar town as teacher and then Hawassa Maize Research Station as researcher before joining University of Gondar on November 2010. Since then, he has been teaching various courses at undergraduate and graduate programs and holding various offices.

With regard to administration, he served as Examination Center Coordinator at college level, Examination Center Director and Academic Programs Directorate Director at university level. He had been also delegate and acting academic vice president of the institution for six months. Alongside his academic and administration duties Mr. Daniel has contributed to the growth and development of the University in a range of other capacities. For his outstanding contribution at institution level, Mr. Daniel has been awarded as the “Best Community Service Provider of the Year” in 2016/17 and the “Best Teacher of the Year” in 2012/13 at University of Gondar.

Mr. Daniel is highly interested in team-based research, community service and technology transfer activities in various interdisciplinary areas. In these activities, he accomplished more than 15 projects as principal and co-investigator and thus published more than 20 papers in reputable journals. He is a professional member of three societies. As part of his capacity building effort, Mr. Daniel participated in more than 10 international trainings, He has presentedmore than 10 papers in international and national conferences.